Card counting is not illegal anywhere in this country.

In New Jersey, it’s illegal for it?to be?illegal; New Jersey long ago banned casinos from barring card counters from playing at the blackjack tables. Of course, the A.C. casinos have taken drastic enough countermeasures that card counting there is difficult at best, such as using eight-deck shoes that are shuffled early and prohibiting mid-shoe entry.

While not illegal in Nevada — as long as you’re not using a device that helps you track the cards — the casinos are private property. Hence, the owners, bosses, card counting illegal or their representatives have the right to “back off” or “bar” anyone they want to for any reason at all. 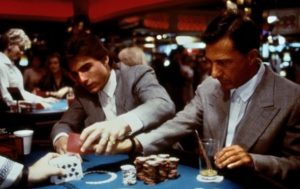 Is this discrimination? Card counters have always thought so. However, it doesn’t fit the legal definition of discrimination, since card counters aren’t members of a race, religion, nationality, political affiliation, etc. In other words, they’re not covered by discrimination laws passed by Congress and upheld by the Supreme Court.

Over the years, many card counters have been “backroomed,” meaning bosses or security guards have forced them into a room or office away from the casino. There, they grab IDs, take mug shots, and generally intimidate players (many card counters, back in the bad old days, were also assaulted; the famous scene in Casino, where DeNiro has a hole-carder’s hand smashed with a hammer is a good representation). We don’t know of any state in the U.S. where it’s legal for a business establishment to detain a customer, unless he or she has committed a crime and the business representative is making a citizen’s arrest (basically, holding the person until the police arrive). So, in theory, you can be detained if you’re caught?cheating, but you cannot be detained for card counting.

That’s not to say it doesn’t occur, and numerous?court cases have resulted from exactly that happening to blackjack players.

Some casinos are tolerant of card counting, especially if the bets aren’t too big and the spreads (the difference in size from one bet to another) aren’t too outrageous. Others are so intolerant of it that they become aggressive in tossing out anyone whom they suspect. This often manifests in their evicting a blackjack player who wins even a little money at the tables, counting or not.

Native American casinos are a different story altogether, especially those within reservations. In these situations, the tribe is the law and the tribal police enforce it. Players have fewer rights and little recourse after the fact in the case of disputes. The local police won’t come, because it’s the tribe’s land and they have no jurisdiction. You can’t sue them either, except in a tribal court. Very touchy.

Two books delve in depth into the rights and responsibilities of players. Both are by gambling defense attorney Bob Nersesian. The first is called?Beat the Players?and you can find it on Amazon. We published and sell Bob’s second book,?The Law for Gamblers.