In response to a recent viral video involving a possibly malicious case of “second dealing” at it’s live online casino, BetOnline put out a press release…

EDITOR’S NOTE: See comments at the end of this article for very important post-publication updates.

Since earlier this week, BetOnline has been embroiled in a scandal. A YouTube video by self-proclaimed professional blackjack player, Michael Morgenstern, went viral claiming to have captured a dealer at a live casino doing something known as “second-dealing.” For those of you who don’t know what that means, here is the definition, straight from WikiPedia:

Second dealing (also known as dealing seconds) is a method of manipulating a deck of cards during a card game by way of dealing the second, rather than the top card of the deck, usually for the purpose of cheating. Second dealing and bottom dealing are also used in performance magic.

Dealing seconds is only a useful trick if one happens to know the value of the top and/or second card in the deck. In the viral video, the dealer is clearly recorded dealing the second card out of the shoe while Michael Morgenstern is playing blackjack at BetOnline’s live-dealer online casino. The raging debate, is whether this was intentional, and if so, who is to blame. 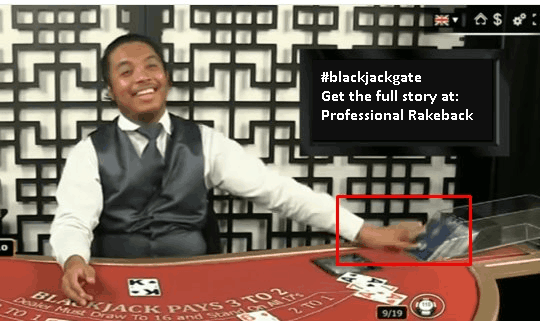 The dealer clearly swapped the cards, via second dealing, as can be seen in this slow motion replay. This brings up a number of questions. Most importantly, did the dealer know the cards that were coming and try to screw the player intentionally? It is possible, but unlikely. Why is it unlikely? Well, we found someone on reddit who made a rather succinct rebuttal and we couldn’t do better if we tried:

What are the possibilities that:

some cheap, under-trained, unprofessional dealer was trying to feel the cards and accidentally pushed one card up the deck

a dealer was explicitly trained and taught to screw a customer out of $100 in a game where they have an betonline blackjack intrinsic house edge, on video, using a trick that we’ve seen exactly 1 time out of >10,000 hands of BJ that have been recorded on twitch or other videos, which also relies on thousands of dollars of investments in technology and hours of training to guarantee consistency?

Then specifically consider the possibility of #1 or #2 occurring on an online platform where the sites extract 100% of deposit from most of their customers before withdrawals ever happen (we know this is true from countless documents, leaks and testimonies from people who have worked with these sites). Online gamblers – the type that plays betonline blackjack blackjack – don’t withdraw partial deposits after losing money, and they rarely withdraw when they’re up either. So why the fuck would online gambling sites ever bother to cheat $100 in a BJ game and risk their most important asset – name integrity – when that money is, statistically speaking, 98% guaranteed to be theirs eventually, from one game or another?

Many people are unaware of this, but live dealer betonline blackjack casinos are rarely run by the online gambling portals that send you to them. These live-dealer pits are more often than not 3rd party companies contracted to provide the labor, cameras, cards, etc. In this case, BetOnline had contracted to use a vender by the name of Global Gaming Labs (GGL). BetOnline has since fired this company and replaced them with another vendor. Here’s there February 18th press release:

Visionary iGaming is now available for all BetOnline players

After client-side complaints regarding the number of available tables, games offered, lackadaisical dealers, and poor hand reporting became common-place (regarding GGL), BetOnline took on the task of finding a superior Live Casino Vendor. After a month-long search in early January 2017, it was decided that ViG would offer a superior product for the BetOnline.ag Players. ViG was notified mid-January, and as of 18 February 2017, the new vendor is in production on BetOnline.ag. Client feedback has been very positive since the switchover!

BetOnline has been criticized for not responding publicly to these allegations of cheating by it’s 3rd party live-dealer casino vendor. Finally they have a response, here it is:

20 February 2017, BetOnline.ag has been notified of an instance of potentially questionable behavior by a black jack dealer from its previous Live Dealer Casino Provider on the date of January 25th, 2017. The Company removed the previous Provider’s Casino and replaced it with the much improved Visionary iGaming Live Dealer product on February 18th 2017.

BetOnline.ag is currently looking into the issue with help and careful cooperation from the previous Live Dealer provider. BetOnline.ag asks that anyone who feels they may have been affected by this dealer’s actions to contact them by email at Casino[at]BetOnline.ag.

As always, BetOnline.ag takes client feedback seriously. And nothing is more important to BetOnline.ag than the integrity of its gambling offerings and the enjoyment of its players.

Time will tell. These viral videos have been viewed over 1.2 million times in the last few days. There are many people on various online forums, the comment sections of the YT videos, etc who claim to have sworn off online gambling because of this incident. Even some poker players have taken this as a cue that online poker is rigged. There were already hundreds of thousands of loonies who think that, despite the fact that our readers here, mostly winning players, know that online poker is in fact not rigged and highly profitable. For those with the skills to win that is.

But we digress, will this harm BetOnline’s reputation? Absolutely it has. While some players will move on to other online casinos, some will simply quit altogether. Another blow to the industry. We sincerely hope that our poker players don’t take this incident, run by a 3rd party who has since been fired, and use it as a means of justifying “bad beats” or anything silly like that. Play well, execute your skills in a disciplined manner over time, and you will prevail. Play well!

What was a “professional blackjack” player doing playing online blackjack in the first place? Surely he wasn’t counting cards or shuffle tracking via the Internet, so where does his edge come from? Is he perhaps just a degenerate gambler at heart?

Why did the dealer deal the second card from the shoe? Was it an honest mistaken (which few believe)? If it wasn’t an honest mistake, what was his motivation? The player was only betting ~$100 per hand. Why cheat in a game with a built in edge, a player betting relatively small amounts, and a very lucrative live-casino contract in the balance… all while being on camera and recorded for all to see!?

Why even bother with -EV gambling online when there is plenty of +EV online poker to be played? Play online using our USA Online Poker guide.